We believe that architecture and the form of life have a two-way effect. From past, the architecture of warm and dry areas of Iran is introverts, and this comes from the climatic conditions of the region, on the other hand, Introversion is rooted in the way people live, which has caused these two issues to be linked together.

This house is a narration of the introverts, calling for extravagance to a banquet in their own places, so a careful distinction between these two features is necessary, in order to find the architectural keywords from different views.

Creating a mysterious atmosphere, the game of light and shadow, having a complete harmony with the climate, having the unique personality of today and making connection with inhabitants, has shaped the basic idea of the structure and its compositions, which is also reflected in the beginning of the house.
An eye catching porous facade and a curve plane is drawn from the main shell that invokes the individuals easily. And from the beginning, dynamic sequences invite the individual from outer space to inside to explore the space.
The courtyards are one of the most striking spots of the introspection of this building, considering the yards in this project is a vital resurgence for today’s home so that the two-dimensional look has given its place a three-dimensional look, so the courtyard endow Life and vitality even at altitude.
According to this attitude, the first courtyard which is pulled into the ground, is both for lighting the guest’s suite and the lack of concentration of sunlight on the ground floor, the next courtyard is between the kitchen and the reception that is semi-public and is able to create a flexible and seamless space with rolling up the Folding side windows, between the kitchen, dining room, courtyard and the reception that will have its own function.
The outer corridor invites us to the bigger and more peaceful courtyard behind the building, which is intended to keep family members together in open air. A feature of this yard is being semi-covered which makes it cooler than the two previous yards.

In fact, the greenness of the trees and the blue of the pool between the volumes causes the stylized space, and the existence of these courtyard shade and partial shades, allow the inhabitants to enjoy even the warmth of the air. In addition, numerous openings in the rooms into the courtyards provide a good view.
Out of the yard, the centrality of the kitchen in this design is not unreasonable. As most of the times the mother is in this place, she should be able to access a precious landscape for her mentally, and also depth of field and sufficient connection to the rooms And side spaces; on the other hand, above the kitchen space and in the central volume of the building, the living room is located in the middle, between the first floor bedrooms to provide better access to the family and to enjoy the pleasant atmosphere between the two yards.
.

Other layout features:
1- Considering the quality of space with its audience
2- Redefinition of the central courtyard
3- Trying to create a sense of belonging to space
4- A special look at the box-stairs for air conditioning and a special launch scheme for this purpose
5- Functional look to the shell (wind direction to the building, control of sunlight and confidentiality)
6- Entrepreneurship for pottery master builders (for ceramic roofing ceilings)
7- Considering the backwardness of the neighborhood ratio
8- Spatial organization according to the employer, climate and 3D view of the yard
9- Considering to the open plan for the warm air inside
10- Considering the quality and dimensions of the courtyards and the visibility and perspective of the openings and to fit them into native trees.
11- Natural air circulation from the backyard (adjacent to the open air of the courtyard is the back of the courtyard, up to the initial volume of the building)
12- Considering the small pools in each of the 3 yards to maintain moisture
By designing this project, we must say that for us incontrovertibility is a decoding sense of revelation that begins with light, sound, and movement, to bring the audience to the discovery of space. 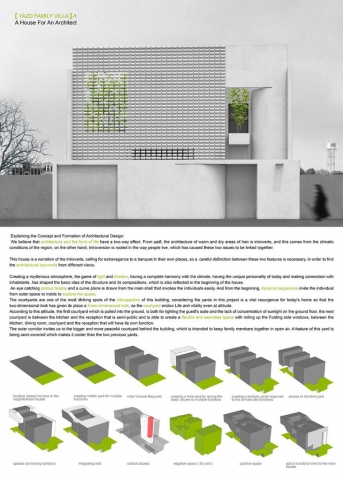 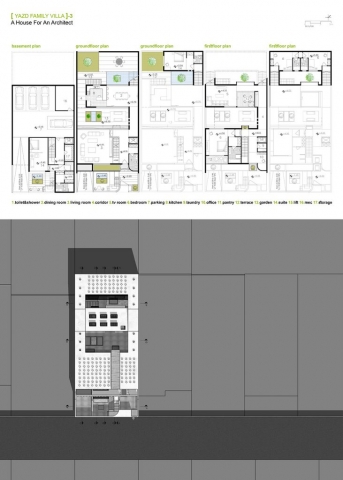 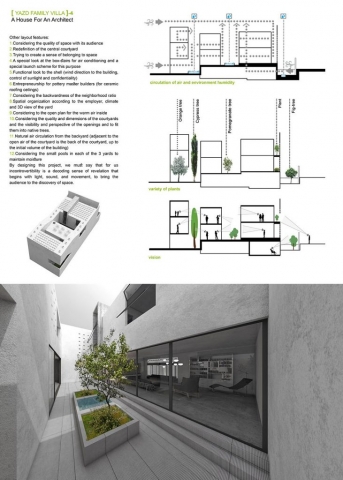 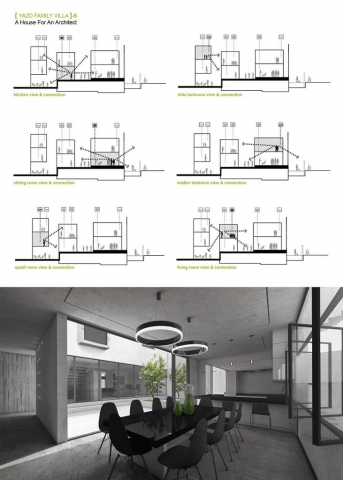 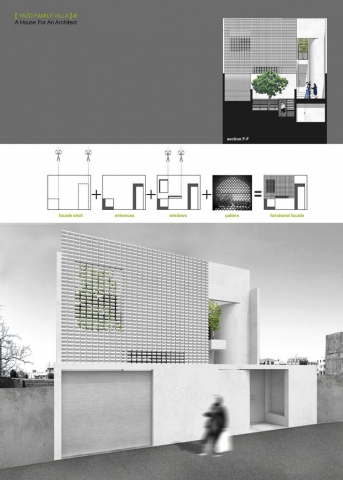 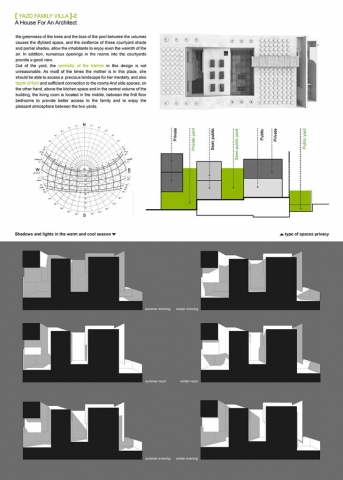